Learn More Where to Buy Certified American Grown Flowers and Greens Click here for a list of farms with availability for mass market, wholesalers, florists, designers and the public.

Chef Tom Kearney, Executive Chef for The Farm on Adderley

We are in for a major treat from a culinary leader whose sourcing philosophy is one-hundred-percent aligned with the values of Field to Vase.

Please join us in welcoming Tom Kearney, executive chef and partner in The Farm on Adderley, located in Brooklyn's Flatbush/Ditmas Park neighborhood.

Chef Tom has been named one of the “50 Most Influential People in Brooklyn Food” by Brooklyn Magazine.

His following among locals and food aficionados throughout the greater New York City region has garnered numerous accolades for The Farm on Adderley, including recently being named to The Village Voice's list: “99 Essential Restaurants in Brooklyn.”

We caught up with Gary Jonas, the restaurant's cofounder and partner with his wife Allison McDowell, along with Chef Kearney.

Gary agreed to a quick interview while Tom was working his magic in the kitchen:

F2V: Gary, can you tell us how the restaurant's name came about?
GJ: “The Farm on Adderley” is an expression that I grew up with in Cape Town, South Africa. Adderley is the main thoroughfare through the city, so the likelihood of having a farm there was impossible. It would be like having a farm on Fifth Avenue in Manhattan. It's like saying “when pigs fly.”

F2V: So would you say it was nearly impossible to open a farm-to-table restaurant back in 2006 in an undiscovered part of Brooklyn?
GJ: At the time, we were pioneers. When we moved there, there was nothing for people who were used to having neighborhood restaurants and bars. We found ourselves going to other neighborhoods to eat.

F2V: Describe yours and Chef Kearney's philosophy.
GJ: Our mission is to source locally and to support local farms. We are an ingredient-driven restaurant. That trend has blown up, but when we started (in 2006) it was not as much of a priority for other restaurants.

F2V: How did you find local purveyors?
GJ: It definitely took a lot of legwork and Tom has done the majority of the sourcing. We have developed relationships with farmers to the extent that we'll even provide seeds for the varieties we want plantrf for us. We also have an in-house butcher to support what we call our “nose to tail” meat program.

F2V: How did you get involved with The Brooklyn Grange?
GJ: We started out sourcing our salad greens from them and the relationship has flourished from there to today, where we cater events at The Grange.

F2V: How do you incorporate local flowers into your meals?
GJ: I'm really excited to see the emphasis on local flowers. Two years after we opened up The Farm on Adderley, we opened the Sycamore Bar & Flowershop, just four blocks away. Allison was running the flower shop. Every morning we would head to (New York's) 28th Street at the flower district and pick up flowers. It was crazy to us that the flowers were shipped to New York from Holland, Europe and all over. Then we started to source locally through some farms selling at Union Square Farmers' Market.
Today, Stems Brooklyn runs the flower shop and provides flowers for events inside the bar. We're happy to see that local flower sourcing is a priority.

Thanks for sharing the story of The Farm on Adderley, Gary! We know the Field to Vase Dinner guests will love Chef Tom's menu in just a few week's time.

Read more about The Farm on Adderley in this profile from Edible Brooklyn. 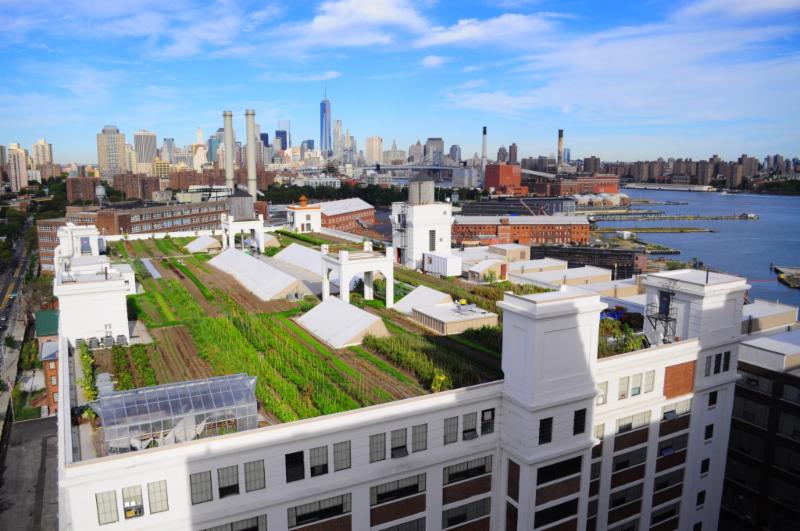 Join us for a special Field to Vase dinner atop the Brooklyn Grange.

We look forward to seeing you on the ROOF of the Brooklyn Grange on August 20th.